A recent tweet from the Tesla CEO Elon Musk regarding acceptance of Dogecoin for Tesla merchandise has sent the meme coin’s price surging.

Dogecoin, a meme coin based on the Shiba Inu dog, soared almost 15% in value on Friday, Jan 14, 2022 after an early morning tweet from the Tesla CEO Elon Musk. The tech billionaire announced via this tweet that Tesla will start accepting DOGE as a valid payment method for some of its merchandise.

Dogecoin shot up by over 15%, breaching the $0.20 per coin mark, within a minute of this development. As can be seen in the Jan 14 candle of the DOGE/USD daily chart below, the meme coin registered notable highs on that day. 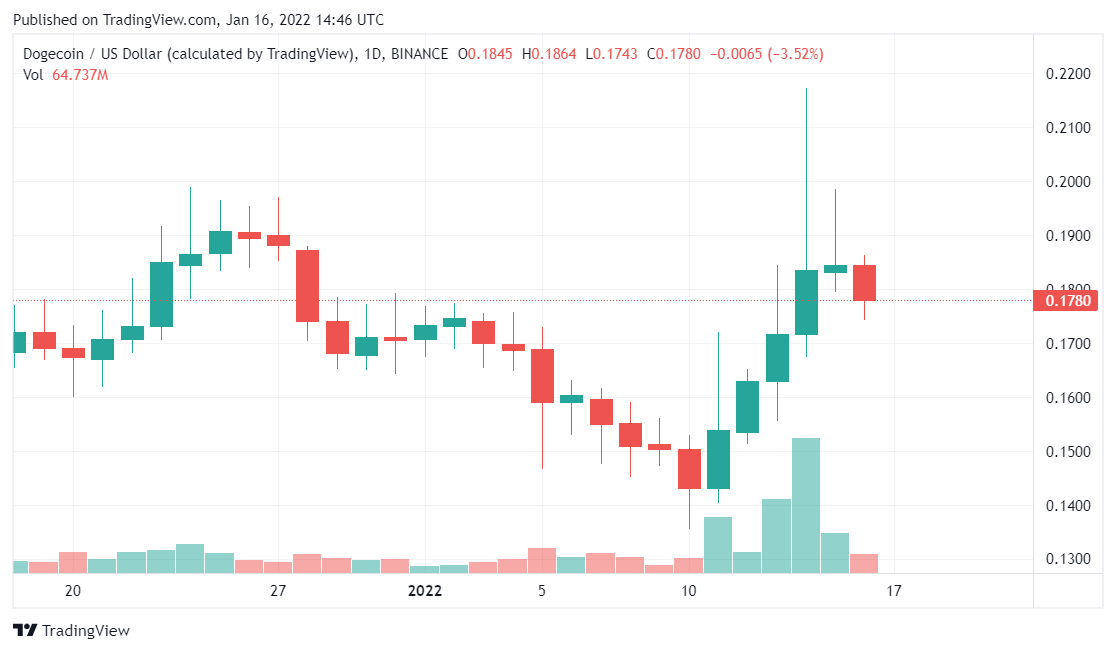 What all Tesla merch can be bought with DOGE for now?

Accepting DOGE for Tesla goods has been in the works for some time. Musk had posted a similar tweet earlier in Dec 2021, informing that Tesla would allow some of its merchandise to be purchased with Dogecoin, and see how things go.

Please note, Tesla merch purchases with DOGE come with a bunch of terms and conditions. To begin, all DOGE payments must come from a Dogecoin wallet. The payment confirmations and orders can take around six hours to arrive and process respectively. In addition, no refunds or order cancellations are allowed for DOGE purchases. Fiat currency orders on the other hand are usually returnable within a 30 days’ time period, for a complete refund.

Musk, the richest person in the world with an estimated net worth of $277 billion, has been a vocal as well as active supporter of Dogecoin. The self-proclaimed ‘Dogefather’ is often seen promoting the cryptocurrency on multiple platforms, including the US TV shows. Back in May 2021, during his appearance on the Saturday Night Live, Musk called Dogecoin the ‘Future of Currency’ and predicted that it will ‘take over the world.’